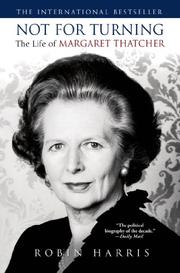 Following her death in April, Margaret Thatcher (1925–2013) is coming in for reassessment, with at least three major biographies out this season and doubtless more to come. That she was not universally admired when she was in office is an understatement; that her own party turned her out of office in 1990 says as much, though of course Britons have turned out greater politicians, from Charles I to Winston Churchill. Harris allows that there is reason for the ambivalence, for Thatcher was not committed to any ideal of social equality along the hated French and American models: “It was not her aim to create a more equal society, only one where there was more opportunity.” Inequality, she believed, went hand in hand with liberty, and though, by Harris’ account, she never bought into the voodoo of trickle-down economics, she also essentially blamed the poor for their own poverty. As is well-known, and as Harris reiterates, Thatcher came from the fringes of the middle class and was a classic by-the-bootstraps case. She was also hypersensitive, vengeful and possessed of a long memory—never a good combination. One key adviser, Harris notes, was fired because “he did not flatter her enough and he made the mistake of ganging up on her with others—albeit for what he thought was her own good.” For all that, the author points to Thatcher’s accomplishments, along the Reagan lines, in making Britons feel proud to be Britons again, absence of empire and all, and in asserting Britain’s role as an equal partner among the Allied powers in the waning days of the Cold War, even if America was not always appreciative of her insistence.

THE BATTLE FOR THE FALKLANDS
by Max Hastings
Nonfiction

THE SENECANS
by Peter Stothard
Nonfiction