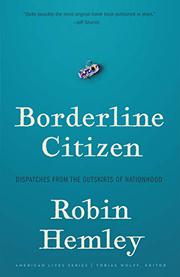 An American expatriate now living in Singapore explores the world between and beyond borders, where the notion of nationalism becomes complicated.

As the author of a dozen or so books and an academic within a number of writing programs, Hemley (A Field Guide for Immersion Writing, 2012, etc.) has crossed the borders between fiction and nonfiction and established himself as an internationalist. His latest is a travel book of sorts but not one aimed at tourists. In “Mr. Chen’s Mountain,” the author invokes an old saying: “If you spend a day in China you can write a book; if you spend a month, you can write an article; if you spend a year, you can’t write anything.” This chapter, one of the book’s most provocative and engaging, chronicles the story of a megawealthy man whose character and wealth resist easy understanding or categorization. The author compares his subject to both Citizen Kane and Jed Clampett, but with a twist on the latter. “What makes him remarkable is that he’s not the Jed Clampett who moved to Beverly Hills but the [one] who returned home,” where his wealth towers in stark contrast to the poverty he left behind. Because many of the chapters were previously published—in the New York Observer, the Iowa Review, and elsewhere—the narrative doesn’t always cohere, and some of the complexities of border rivalries and histories can be difficult to apprehend quickly. However, this may be an element of Hemley’s overall theme about how lands can change allegiances and alliances many times without the natives themselves changing. “Governments are necessary, and it’s natural to want to consider oneself part of something larger,” he writes. “But I’ve never been fully convinced that nations as such make sense.” Among other topics, the author explores the Falkland Islands, Hong Kong, and the fraught border between India and Bangladesh.

Engaging bits about intriguing lands, all in service of trying to “understand the complexities of the world.”