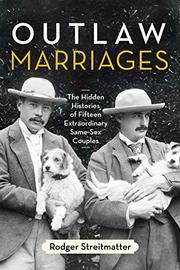 Streitmatter (Communication/American Univ.; From Perverts to Fab Five: The Media's Changing Depiction of Gay Men and Lesbians, 2008, etc.) considers the cases of 15 couples from a time when such unions were scandalous. In the households of Gertrude Stein and Alice B. Toklas, Robert Rauschenberg and Jasper Johns and James Ivory and Ismail Merchant, both parties were famous. Typically, though, just one member of the outlaw marriage was celebrated. The less well-known, long-suffering partner was muse to his or her famous spouse. That was the case with Walt Whitman and his beloved streetcar conductor, Jane Addams and her financial supporter, J.C. Leyendecker and his Arrow Collar model, Greta Garbo and her social advisor and Tennessee Williams and his loyal caretaker. These notable subjects were not ordinary folk; they were social reformers, poets, playwrights and painters. The author begins each story with thumbnail bios, followed by a short section titled “Creating an Outlaw Marriage” and then some information on how they worked together. The tales continue with the ebb and flow of romance, faithfulness and loyalty, infidelity and betrayal. Finally, each story draws on newspaper obituaries that generally omitted mention of the spouse who figured so largely in the life of the deceased. While his topic undeniably interesting, journalist Streitmatter adheres to his journeyman’s formula too much; however, his book might be a nice gift for just the right couple, for he clearly loves his story. In the epilogue, the author proudly announces that he and his partner are now husband and husband.

Joint biographies, rendered in mostly artless prose, of successful and influential gay and lesbian couples who married before it was allowed.

EMPTY WITHOUT YOU
by Rodger Streitmatter
Nonfiction

MIGHTIER THAN THE SWORD
by Rodger Streitmatter

A HISTORY OF GAY LITERATURE
by Gregory Woods
Nonfiction