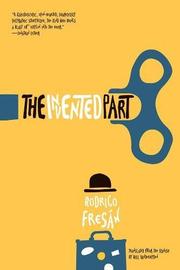 by Rodrigo Fresán ; translated by Will Vanderhyden
BUY NOW FROM
AMAZON
GET WEEKLY BOOK RECOMMENDATIONS:

“Is Jell-O animal, vegetal, mineral, or interplanetary?” A tour de force from Argentinian writer Fresán, charting a course from confusion to confusion and back again.

Think of it as a portrait of the artist as a young cultural omnivore grown old, under whose lens Heraclitus, Einstein, and Looney Tunes all have more or less equal footing. Fresán’s long novel begins with what may be a subtle nod to Proust, save that instead of retreating to a quiet room The Boy, our protagonist’s first emanation, is afoot and on the run, tearing around on street and sand, “running like that Roadrunner the Coyote can’t stop chasing.” The Coyote runs because the Roadrunner does, too, and The Boy asks endless questions because it is in his nature to do so, even if he doesn’t quite have the language to formulate all the things that are bothering him: why are fairy tales full of witches instead of fairies? Why do we have names for our fingers but not our toes? And so on. The questions do not end; they only become more complex and more confounding as numerous other writerly guises emerge to fit each of the seven parts of the book. In one, having been ravished and blogged by the leitmotif character he calls IKEA, “much more well-known and, consequently, more successful than he was,” he daydreams of having his life adapted and filmed by the ubiquitous James Franco; in another, he meditates on how it was that Lolita turned the eccentric writer Vladimir Nabokov “centric,” illustrating the power of art to shape life. Continuing in that vein, Fresán offers the utterly satisfying thought that no matter how miserable they were in their fictional lives, Emma Bovary and Ahab, among other characters, “die happy because, immortal, they’re well written.” Studded with references to everyone from Dylan and the Beatles to Stanley Kubrick and F. Scott Fitzgerald, it adds up to a lively if sometimes-disjointed paean to creativity.

An exemplary postmodern novel that is both literature and entertainment.

THE BOTTOM OF THE SKY
by Rodrigo Fresán
Fiction

MORE BY WILL VANDERHYDEN

THE BOTTOM OF THE SKY
by Rodrigo Fresán
Fiction