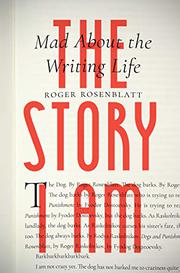 THE STORY I AM

A prolific writer reflects on his commitment to his craft.

Essayist, novelist, playwright, and English professor Rosenblatt gathers a sampling from his 40-year writing career that reveals the “exhilaration and exasperation” of the work that has long engaged him: “I write simply because I am enthralled with the writer’s life, mad for it, and with the act of writing.” Among the pieces are excerpts—some as short as a paragraph—from longer works, such as his memoirs Kayak Morning (“Writing makes sorrow endurable, evil intelligible, justice desirable, and love possible”), The Boy Detective, Making Toast, and the unpublished Unaccompanied Minor; his mock instruction book Rules for Aging (nobody is “denigrating your work behind your back,” he promises); essays from previous collections, such as Anything Can Happen; pieces that appeared in newspapers and literary journals; and selections from published and unpublished novels and plays. One essay specifically on craft comes from his writing companion Unless It Moves the Human Heart, but not all pieces concern writing directly. Rosenblatt discloses, for example, his mother’s suffering from Alzheimer’s disease; praises a teacher from whom he learned to “look at the world with wonder and pleasure”; and describes an image, recalled from childhood, of seeing a young woman weeping on stone steps in Columbus Circle. Even though he knows that using a word processor would make life easier for his publishers, he prefers to compose on a yellow legal notepad and transcribe his work on an electric typewriter. “Editors never question why they must put my materials into the system for me,” he writes. “They have simply found it expedient to adapt to my strangeness, mainly because I have never indicated that I would adapt to them.” Appreciative of sound and cadence, Rosenblatt has always been nourished by poets. Sometimes nostalgic, even sad, he regrets that although he has not “eradicated world poverty” or “put an end to injustice, or even to casual cruelty,” he has given the world a singular bequest: love.

A warmhearted testimony of gratitude and humility.

THE BOOK OF LOVE
by Roger Rosenblatt
Nonfiction