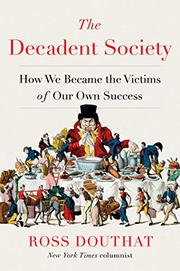 How We Became the Victims of Our Own Success
by Ross Douthat
BUY NOW FROM
AMAZON
BARNES & NOBLE
LOCAL BOOKSELLER
GET WEEKLY BOOK RECOMMENDATIONS:

New York Times op-ed columnist and National Review film critic Douthat (To Change the Church: Pope Francis and the Future of Catholicism, 2018, etc.) delivers an impassioned but not entirely convincing critique of American and European society, which he condemns as depressed, enervated, and bored, and he points to economic stagnation, cultural and intellectual exhaustion, and a dearth of technological and scientific marvels. According to Douthat, America’s space project was the last time technological prowess ignited the public’s imagination; now, instead of a shared vision of a “giant leap for mankind,” we are left with a sense of resignation. The domination of near monopolies quashes economic risk-taking and growth; “below-replacement fertility” portends a “sterile, aging world”; a polarized, sclerotic government is mired in gridlock; and a narrowing range of cultural offerings reflects widespread cultural malaise. Movies reprise “unoriginal stories based on intellectual properties that have strong brand recognition”; publishers depend on “recursive franchises and young-adult blockbusters”; and pop music reveals “a sharp decline in the diversity of chords in hit songs” and repetitive lyrics. Douthat acknowledges that readers, many of whom have heard similar arguments in countless recent books, may not be as distraught as he is. Despite social, political, and ecological problems, they may ask, “instead of bemoaning the inevitable flaws of our present situation, shouldn’t we work harder to celebrate its virtues”? The author thinks not. Although within a decadent society individuals can still “work toward renewal and renaissance”; although sustainable decadence “offers the ample benefits of prosperity with fewer of the risks that more disruptive eras offer,” still, he insists that “the unresisted drift of decadence leads, however slowly and comfortably, into a territory of darkness.” Describing himself as a believing Christian, Douthat underscores religion’s entanglement with decadence. No civilization, he writes, “has thrived without a confidence that there was more to the human story than just the material world as we understand it.” Underlying his call for change is an invocation to look “heavenward: toward God, toward the stars, or both.”

TO CHANGE THE CHURCH
by Ross Douthat
Nonfiction