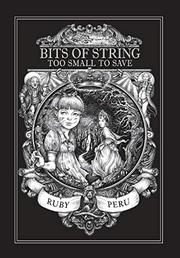 BITS OF STRING TOO SMALL TO SAVE

In this frequently giggle-out-loud debut novel for teens and adults, 10-year-old “persnickety” ElizabethAnn Von Earp leaves behind her late-21st-century arid, insecticide- and hot tar–smelling town to follow her free-spirited Grandma—and a talking monkey wearing a polo shirt and a gold watch—down an animal burrow that proves to be a portal to the failing kingdom of Bumblegreen. There, magic has been banned; portal travel to other worlds is punishable by death; parents have developed an allergy to their babies so severe that infants must be fostered by genetically engineered monkeys; and a disease causes animals to turn into humans. With nods to Lewis Carroll’s Alice’s Adventures in Wonderland, there is a wealth of entertaining details to unpack here, and Peru keeps the narrative flowing, alternately shifting focus from ElizabethAnn to Grandma (a fugitive from Bumblegreen justice); monkey geneticist Zade Fandey; the duchess, a scheming hoarder (“to own is to exist”); wistful trout-turned-human Hank; pregnant cook Tammy, abandoned and seeking black magic vengeance; her seducer, Fast Eddie; Earl, the watch-wearing monkey; ElizabethAnn’s dog, Jackson; and Bumblegreen’s 13-year-old Queen Dahlia, who would rather make cheese than deal with affairs of state. Among her outlandish adventures, ElizabethAnn weathers capture by butterflies with dark intentions, a mad dash over the rainforest canopy, and a 20-foot growth spurt during a mob-fueled trial to depose the queen, eventually becoming aware that she has a stake in Bumblegreen’s survival. Indeed, the author deepens the fantasy with unexpectedly thoughtful moments as ElizabethAnn and Dahlia gain believable strength and insight over the course of the book. ElizabethAnn’s experience at one point with “the elusive nature of momentary inner peace,” tinged with sadness, is particularly evocative. The impressively creative novel is divided into four parts (“Five Syllables Worth of Girl,” “The Cumbersome Outriggings of Queenliness,” “The Understated Elegance of Impossible Tasks,” and “The Hue and Cry of a Bloodletting Mob”), each one introduced by an exquisitely detailed, pen-and-ink image by debut illustrator Harris.