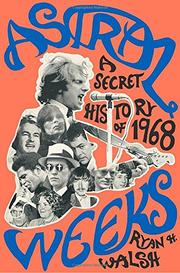 A chaotic cultural chronicle of a great city during a pivotal year.

A lot was happening in Boston in 1968. Looking back, writes musician and music critic Walsh, “is like catching a glimpse of an upside down, hallucinogenic version of the thriving metropolis that stands today.” In his first book, the author attempts to bring it all back home, to connect a tangle of loose wires and see what one thing might have had to do with the other. Over here, we have Irish transplant Van Morrison, set to make his greatest album: a one-of-a-kind, stream-of-consciousness song cycle steeped in death and rebirth and “completely preoccupied with notions and transcendence and the sublime.” Over there, we have Mel Lyman, the writer and musician who established a worshipful cult following known as the Fort Hill Community. At the same time, MGM Records was trying to invent a genre called the Boston Sound, which garnered more press than listeners. There was also a cut-up collage program on local TV, What’s Happening, Mr. Silver? that was capturing everyone’s attention. The documentarian Frederick Wiseman was upsetting officials with Titicut Follies, the movie The Boston Strangler was trying an unresolved case on screen, and a pre–Ram Dass Richard Alpert was turning on and tuning in with Timothy Leary. Walsh delivers plenty of information and offers some insightful stories about this time—particularly about the making of Morrison’s masterpiece—and occasionally draws some interesting associations: the mystical influences, for example, that inspired the Velvet Underground, their acolyte Jonathan Richman, and Morrison himself. Unfortunately, the narrative parts fail to fully cohere. Unlike Will Hermes’ Love Goes to Buildings on Fire (2011), which fully captured the changing cultural landscape of a thriving city (New York), no clear image ever quite emerges and nothing solid develops from all these coincidences.

A patchy work of pop history that tells more than it shows.

LOVE GOES TO BUILDINGS ON FIRE
by Will Hermes
Nonfiction