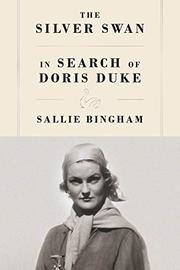 A portrait of a well-known philanthropist who kept her thoughts secret.

When Doris Duke (1912-1993) turned 21, she received an installment of $10 million from the trust she inherited from her billionaire father, tobacco tycoon James Buchanan “Buck” Duke. At the age of 25, she got another $10 million, and she was reputed to be the richest woman in the world. By the time she died, her net worth had burgeoned to $1.2 billion, mostly directed to the Doris Duke Charitable Foundation to support arts and social services projects. Bingham (The Blue Box: Three Lives in Letters, 2014, etc.) became fascinated by the woman whose image was relegated to a small photograph in a garden at Duke University, the institution her father had endowed. Although the author had access to a huge archive of Duke’s personal papers, none of these included diaries, journals, or more than a few letters. “Nothing,” Bingham notes, “that has been written or said about her can be proved—or disproved.” The lack of revealing material proves a challenge that the author fails to fully overcome. The biography offers a chronicle of Duke’s philanthropic largesse; her worldwide travels; luxurious residences; flamboyant marriages and love affairs; the “feuds, separations, and firings” that characterized her relationships with associates and employees; and her often puzzling friendships: with Imelda Marcos, for one, to whom Duke lent a great deal of money to help out with legal fees when she was accused of extortion; Pee-wee Herman, who earned Duke’s sympathy when he was hounded by tabloids after a sexual scandal; and especially Charlene Heffner, known as Chandi, who was 32 when she met 74-year-old Duke in 1986, moved into her home, and became her intimate companion. Duke formally adopted Chandi two years later; three years after that, she instructed her staff to eject Chandi from her home. After Duke died, her foundation settled with Chandi for $65 million in return for her silence about their relationship. Bingham, too, remains silent on the matter of Duke’s sexuality, emotional needs, and any glimpse of her inner life.

An unsatisfying portrait of a complex woman.