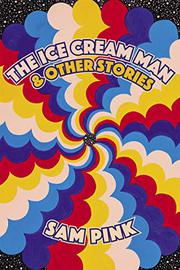 THE ICE CREAM MAN & OTHER STORIES

It's almost impossible to describe one of Pink’s books without relying on adjectives chronically overused to evoke a certain type of 21st-century voice-driven urban realism. His books are gritty, it’s true; also cynical, often vicious, funny in a wry, despairing sort of way. The characters that populate Pink’s world are junkies and drunks, homeless veterans and runaways, people laboring at brutally absurd jobs, people lost in the overwhelming trash of their lives. Yet the feeling one leaves a Pink novel with is less world-weariness or disgust than the recognition of a tremulous, wavering kind of belief in tenderness, beauty, and hope. Expressing itself in Pink’s signature single-sentence paragraphs, and replete with onomatopoetic belches, squelches, slurps, and titters, the voice that narrates this book is no exception to this rule. Pink splits the stories into three geographically defined sections and proceeds to follow his frequently unnamed narrators through the frozen alleys of Chicago to the blazing cul-de-sacs of Florida and back up north to the stark fields of Michigan. Along the way readers look through the eyes of a murderous dishwasher who hates you (every you) more even than the ramekins he washes; a novice ice cream man finding a species of the sublime in doing “maybe the first job [he] ever had where people were happy to see [him]”; a wedding caterer, awash in the beauty of the banal, who comes to an unlikely tête-à-tête with a magnificent, and dangerous, stag. There are young women who have stomped the guts out of rats, friendly meth addicts willing to guide the narrator to the best local tattoo shop, many beloved animal companions, and many beloved, if often unsalvageable, human friends. Pink, who is also a visual artist and a musician, continues exploring a world of the relentlessly profane with the kind of tender humanity usually reserved for stories more interested in the redemption of their characters. Pink is far too honest to fall into this trap. His characters don’t need redemption so much as they need a sandwich, or a blanket, or someone to talk with in order to pass the time, and herein lies the collection’s greatest, and most surprising, strength.

A voice like none other writing today—Pink is riveting.

THIS BOOK IS NOT FOR YOU
by Daniel A. Hoyt
Fiction