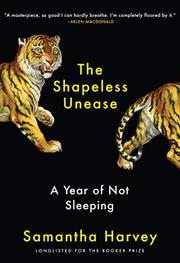 A Year of Not Sleeping
by Samantha Harvey
BUY NOW FROM
AMAZON
BARNES & NOBLE
LOCAL BOOKSELLER
GET WEEKLY BOOK RECOMMENDATIONS:

Sleeplessness gets the Susan Sontag illness-as-metaphor treatment in this pensive, compact, lyrical inquiry into the author’s nighttime demons.

In her attempt to make sense of why she can’t sleep, Betty Trask Award–winning novelist Harvey meditates, often poetically, on a wide range of topics. Her sleep issues began in the summer of 2016. A few months later, the author had self-diagnosed “possible chronic Post Brexit Insomnia” along with the “existence of persistent panic.” She began suffering three or four nights per week of no sleep. She tried everything: sleeping aids, prescription drugs, visits to a CBT sleep clinic, acupuncture, “learning French, making mosaics, playing solitaire, doing jigsaws,” watching episodes of Poldark and The Crown, and listening to “an audio edition of Remembrance of Things Past.” Eventually, Harvey began to feel “increasingly feral, like a wild animal enduring a cage.” She stopped writing and was teaching on zero hours of sleep, and her thoughts fragmented further, a process that she captures with vivid clarity, darkly tinged yet unblurred. The author thought about writing a story about a man who, while robbing a cash machine, loses his wedding ring. It unfurls in sections, floating along in the darkness like quiet waves. “Is the story going anywhere?” Harvey asks herself. Also, is insomnia caused by fear or anxiety? “Anxiety, my hypnotherapist says; you are safe in your bed yet your heart is racing as if a tiger is present. You must learn to see that there is no tiger,” she writes. “But there is a tiger: sleep deprivation. Sleep deprivation isn’t a perceived threat but a real one, like thirst or starvation.” Finally, “one day when you’re done with it, it will lose its footing and fall away, and you’ll drop each night into sleep without knowing how you once found it impossible.” Though the narrative is a highly personal interior monologue, others who have suffered insomnia will find abundant resonance.

An exquisitely rendered voyage into the “shapelessness of a life without sleep, where days merge unbounded.”