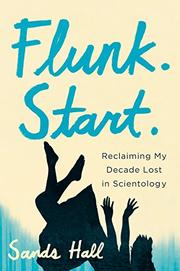 A former Scientologist examines why she entered the church and then left it.

Hall (English/Franklin & Marshall Coll.; Tools of the Writer’s Craft, 2005, etc.) didn't intend to join with the Scientologists, but when she fell in love with a man who was deeply committed to the Church of Scientology, her resolve was slowly worn away. In this revealing memoir, the author explains her many conflicting emotions toward the religion before, during, and after her seven years as a Scientologist. Aspects of the structure appealed to her—e.g., the examining of words and the ability to work out problems so they didn't fester—but other parts deeply bothered her: the expenses involved in purchasing the books written by L. Ron Hubbard and of attending classes, the lifetime (and beyond) commitment required to reach a higher level, and some of the controversial tactics that she heard were used by some Scientologists. Throughout the book, Hall interweaves the story of her family, particularly of her older brother, Oakley, a wild child and wilder adult who eventually took one risk too many and suffered permanent consequences. The author is sincere and open about why Scientology appealed to her, and she effectively uses Hubbard's work to show the complexity and strangeness of thinking. Using the terminology of the Scientologists, she discusses the tactics of "auditing," or counseling, the training routines, the endless drills she went through to learn the Tech, and the anxiety she felt when she had to visit the “Ethics Officer.” All of these tactics are used to drill into the minds of believers that Hubbard's version of reality is the absolute truth. Hall risks her friendships with Scientologists by revealing what she experienced, and her work serves as a significant behind-the-scenes look at this cultlike religion.

Frank and edifying information on Scientology from a woman who experienced it firsthand. A good complement to Lawrence Wright’s Going Clear (2013).

INSIDE SCIENTOLOGY
by Janet Reitman
Nonfiction

THE CHURCH OF SCIENTOLOGY
by Hugh B. Urban
Nonfiction