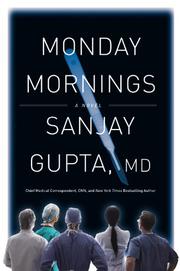 In this debut novel, Gupta commits some of the more common errors of Fiction 101 by telling more than showing, and then showing the mundane with as much attention as the distinctive. Thus the second sentence of the book: “Wearing bright blue polyester jumpsuits with a yellow insignia on the left front pocket and standard-issue black boots, they were moving fast.” Moving fast, check. But would it have mattered whether the uniforms were of green cotton, the badges red, the boots brown? The matter-of-factness and attention to every detail would probably serve a surgeon in theater very well, the purposes of a yarn less effectively; yet both qualities overwhelm the dramatic: “The aneurysm, a small blister on the surface of an artery, had suddenly let loose, spraying blood throughout her brain. She had likely felt a sudden thunderclap headache, and within seconds was rendered unconscious.” “One of the possible risks was damage to the olfactory nerve that ran near the cancerous growth. If that was nicked or cut, the patient would lose the sense of smell.” Just so, Gupta’s characters are of the stock variety: the hardbitten, arrogant master cutter, the encouraging mentor, the poor kid out to save the world ("the first Robidaux to consider college," the foreign resident who works twice as hard as everyone else—in short, the kind of people whom, mutatis mutandis, you’d send into combat in a World War II film, or, in this instance, into the emergency ward. In that regard, Gupta’s book makes its greatest contribution: It shows that a doctor’s life isn’t all glamour and golf on one hand or completely clinical on the other, even if most of the coitus is interruptus. All does not end well, not for certain patients and certain docs alike, but the quotidian world ticks on; it’s very much as if James Michener had attempted a medical thriller, though without the thrill and without Michener’s epic length.

Competent but no more—and, of course, one always wants something beyond mere competence from a surgeon.

THE SURGEON
by Tess Gerritsen
Indie