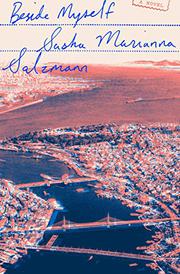 A woman searches for her twin—and herself—while recounting her family history in the Soviet Union and West Germany.

Alissa, or Ali, was a child when she emigrated with her family from the Soviet Union to West Germany. She and her twin, Anton, traveled with their parents and grandfather by train. Years later, Anton disappears, a blank postcard mailed from Istanbul the only clue to his whereabouts. So Ali goes to Istanbul. Her stay in the city more or less bookends this strange, fascinating first novel by Salzmann, a prolific writer of essays and plays and the founder of a small magazine, among other things, in their native Berlin. The meat of the book traces Ali and Anton’s family history, from their parents to their grandparents and great-grandparents, on either side. Theirs is a Jewish family, but the fact that they’re largely secular doesn’t protect them from rising anti-Semitism in the USSR, especially after Stalin’s death in 1953. Meanwhile, Ali slinks through contemporary Istanbul, nominally searching for Anton as her identity, particularly her gender, begins to disintegrate—or to open up, depending on your perspective. Ali’s own perspective isn’t entirely intelligible. This is partly due to Salzmann’s cool, disaffected narrative voice, which is a wonder to behold but can also be a little too distancing: Anton never solidifies as a fully fledged character, and neither does the twins’ father, to whom much of their unhappiness is attributed. Still, these are relatively minor flaws. Salzmann has an expansive vision, and their experimentation with the form of the novel, even when it doesn’t always pan out, consistently intrigues.

An experimental novel spanning continents as well as generations explores the intertwining of family, gender, and identity.

"PROMISE ME YOU'LL SHOOT YOURSELF"
by Florian Huber
Fiction

LOOK AT ME
by Mareike Krügel
Fiction

THE TRUTH AND OTHER LIES
by Sascha Arango

DIVIDE ME BY ZERO
by Lara Vapnyar
Fiction