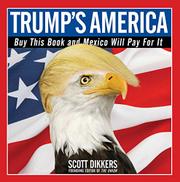 Buy This Book and Mexico Will Pay for It
by Scott Dikkers
BUY NOW FROM
AMAZON
GET WEEKLY BOOK RECOMMENDATIONS:

A founding editor of the Onion provides a satirical guide to surviving Donald Trump’s America.

In a book that was previously published in 2016 as Trump’s America: The Complete Loser’s Guide, Dikkers and his formidable team of contributors deliver 170 pages of hilarity very much in the mold of other Onion-related books, including Our Dumb Century and Our Dumb World. Packed with photographs, infographics, vintage-looking newspaper and magazine clippings, graphs, sidebars, lists, and all the other visual elements in the Onion’s bag of tricks, the book will find plenty of laughs among the anti-Trump crowd. Dikkers and company cover all the possible attack points, taking the president to task for narcissism, misogyny, xenophobia, racism, and everything else that has made Trump such a focal point of anger and endless controversy. Chapters include “The World Community: Un-American” and “The Environment: Hippie Crap,” and the satire is relentless and consistently spot-on. Among the items “To Be Thrown Out of the White House on Day One” are “Obama’s Koran” and “any administrative assistant over 26.” Trump’s proposed citizenship exam includes such entries as, “Are you from Mexico? If yes, describes what makes you one of the good ones.” Throughout the book, Dikkers takes aim at Trump’s obsessive, ridiculous Twitter habits, with such “Top Trump Tweets” as “I will never donate blood because I made it and it’s mine” and “I’m refusing the pathetic presidential salary. Will donate every penny to breast enhancement research. #charity.” The funniest spread may be “Donald Trump’s World Map,” which shows the president’s alleged thoughts on dozens of areas around the world: India includes “smelly food” and “50 million IT guys,” while Russia features “very nice KGB friends,” and Africa is known for “birthplace of Barack Obama,” “animals that look like rugs,” and “Melania’s diamonds.” While it can be argued that most of this material preaches to the choir, it’s a damned funny sermon, just the thing to while away the time until the next outrage.

Sure to appeal to Onion fans and anyone unhappy with our current president.


9 ENTERTAINING BOOKS THAT WILL MAKE YOU LOL :

THE ARRANGEMENT
by Sarah Dunn
Fiction

WAIT TILL YOU SEE ME DANCE
by Deb Olin Unferth
Children

ALL GROWN UP
by Jami Attenberg
Fiction

A PERILOUS PATH
by Sherrilyn A. Ifill
Indie

TRUMP AS ADJECTIVE
by E
Nonfiction

THE ONION BOOK OF KNOWN KNOWLEDGE
by The Onion
Indie

I AM AMERICA (AND SO CAN YOU!)
by Stephen Colbert
Newsletter sign-up