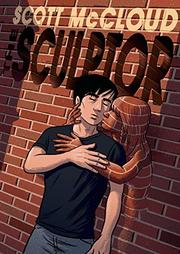 Comics writer/illustrator and theorist McCloud (Making Comics, 2006, etc.) presents an artist’s struggle to make a name for himself and the complications love brings to the Faustian deal he's made to gain total control of his craft.

David Smith once had a promising career as a sculptor, but his abrasive personality burned too many bridges, and now he can’t even hold down a job flipping burgers. Stewing in self-pity and booze, he receives an uncanny visitor who offers him a choice between the long, slow burn of the compromised life or the firework pop of the superstar. Without hesitation, David chooses to be a martyr for his art, and soon he has the ability to mold any material simply by touch—and 200 days to live. He launches into an ecstasy of self-expression, fantastically shaping slab after slab of granite like it was so much potter’s clay, but his first showing of the new work only sends him spiraling further into despondency—until beautiful, free-spirited Meg swoops in on angel wings. Her joie de vivre eases David’s tortured mind, and a daffy friendship eventually blossoms into mad passion. But even as David refines his manipulation of matter and his sense of life’s worth, his ultimate deadline looms. At nearly 500 pages, the tale still manages a brisk pace, with crosscut scenes or subtle but telling differences between nearly identical frames propelling the gaze through uncluttered text and crisp, clear lines, while the reader’s mind winds agreeably around the steadily twisting plot. McCloud can sacrifice logic in favor of function, though, and sometimes reactions feel outsized, emotions overwrought and dialogue pat, functioning more as punctuation in a sequence of panels than as the actions of nuanced characters, especially when the work nakedly addresses such grandiose issues as artistic integrity, the glories and agonies of love, and the desperate beauty of life.

Masterfully paneled and attractively illustrated but populated by archetypes.

We all sometimes fantasize about having a superpower—think how much more exciting your life would be if you could fly or read minds or turn your enemies into frogs. As a teenager, cartoonist Scott McCloud started doodling about character who had a particularly powerful ability—he could shape any material he ...

THE ENCYCLOPEDIA OF EARLY EARTH
by Isabel Greenberg
Adult