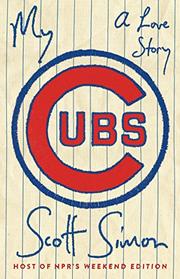 The NPR Weekend Edition host offers an extended personal essay about his lifelong infatuation with the Chicago Cubs.

Even nonfans of Major League Baseball might know that the Cubs finally won the World Series this past October, a feat they hadn’t accomplished since 1908. For decades, fans and pundits spoke, often superstitiously, about the team’s curse. Simon (Unforgettable: A Son, a Mother and the Lessons of a Lifetime, 2015, etc.) is unquestionably a die-hard fan. “My politics, religion, and personal tastes change with whatever I learn from life,” he writes. “But being a Cubs fan is my nature, my heritage, and probably somewhere in my chromosomes. If you prick me, I’m quite sure I’ll bleed Cubby blue.” Over the years, the author bought into the myth that on the rare occasions when the Cubs were playing well, he needed to stay away from the stadium, TV broadcasts, and the radio play-by-play lest his attention would somehow cause the team to lose. Numerous devoted Cubs’ fans and baseball commentators have covered most of the material in this narrowly focused memoir. Occasionally, Simon delves into mostly forgotten Cubs’ history, such as the franchise’s slowness to hire black players after Jackie Robinson broke the sport’s racial barrier shortly after World War II. The author’s musings on the culture of Chicago and the overall nature of over-the-top sports fandom are more original and thus more enlightening. For example, Simon relates the saga of the Billy Goat Tavern, the legendary sports bar near Wrigley Field. The author is also informative about the commercial and cultural life that has developed near the stadium, an area eventually dubbed Wrigleyville. The author is a solid stylist, and his descriptions of Cubs’ players, managers, and owners resonate, as do his anecdotes about his wife and daughters as they try to understand his mania.

A pleasant, slight memoir with a happy ending.

THE EXTRA 2%
by Jonah Keri
Nonfiction

BASEBALL IN THE GARDEN OF EDEN
by John Thorn
Indie