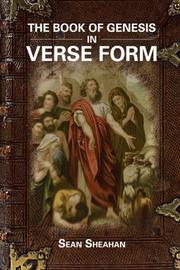 THE BOOK OF GENESIS IN VERSE FORM

In the centuries since its composition, some literary heavy hitters have taken cracks at reshaping the book of Genesis—John Milton, Mark Twain and Thomas Mann among them. So when Sheahan presents his “verse form” of the first book of the Bible, readers may wonder if he’s bitten off more than he can chew. He hasn’t, but he has set himself a tough task. Beginning “in the beginning” and taking readers all the way to Joseph’s Egyptian palace, Sheahan aims to portray all of Genesis’ motley crew—from Adam to Abraham to Jacob to the pharaoh—essentially in rhyming couplets. Most of the time, his scheme comes off gracefully, as when Abraham prepares to kill his son Isaac in a reworking of Genesis 22: “He raised his sword to smite his son / An offering to the Lord, / But an angel voice from Heaven called:— / ‘Abraham, put down your sword.’ ” Only rarely do the rhymes deform the verse, as in the poem “Jacob Blesses His Twelve Sons and Dies”; most often, the text is quite accessible. Of course, Genesis’ readability has less to do with the book itself and more to do with its translation; the King James Version, for example, may feel “archaic” to some, but more modern glosses, such as the New Revised Standard Version or University of California, Berkeley, professor Robert Alter’s translations, are paragons of textual accessibility. As a result, Sheahan’s poetry isn’t unique in its readability, but it’s appealingly comprehensible. Some readers may note, however, that in making Genesis more approachable, Sheahan has polished away some of its seedier elements, including Lot’s incestuous liaisons, Noah’s drunkenness and God’s fear at the construction of the Tower of Babel. These may not be popular passages, but they are Scripture, and by leaving them out, Sheahan does an injustice to one of the greatest, most challenging texts ever written.

An able, if incomplete, rendering of Genesis in elegant verse.