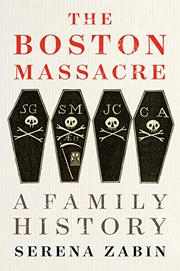 The British army was not just a man’s profession 250 years ago but instead “a social world of families, friends, and children.”

A popular British song at the time of the Revolutionary War was called “The Girl I Left Behind Me.” As it turns out, writes Zabin (History and American Studies/Carleton Coll.; Dangerous Economies: Status and Commerce in Imperial New York, 2009, etc.), the British army was in the habit of bringing women along with it, or intermarrying with local populations, so that life in a bivouac was a family affair. For four years, writes the author, one unit lived in Boston “on a peninsula hardly bigger than a square mile.” Zabin observes that the old term “camp followers” denigrates the contributions of women to these units who contributed work that was useful and necessary. They were also prolific; as the author notes, “in the years 1768 to 1772, more than a hundred soldiers brought their babies into Boston’s churches to be baptized.” When the British unit quartered in Boston, late of campaigns in Portugal and elsewhere during the Seven Years’ War, was caught up in the chain of rebellious events that culminated in the Boston Massacre, a local defended the soldiers who were on trial for murder. That local was John Adams, who was, at the same time, involved in the first stirrings of the revolution. One witness, Zabin writes, was a Massachusetts woman who knew the soldiers well enough to know their first names—and, indeed, married a member of the regiment less than a month later. By that time, such marriages were no longer points of pride, though, and neither defense nor prosecution raised what might have been interpreted as witness bias because “to do so would have cracked open the pretense to which both sides had tacitly agreed: that an enormous gulf separated soldiers and civilians.”

A well-written, thoroughly interesting addition to the social history of the American Colonies.