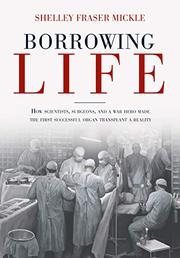 Admiring biographies of a scientist, two surgeons, and several patients whose lives came together in a 1954 kidney transplant, the first that succeeded, heralding a medical revolution that continues to this day.

Award-winning novelist Mickle (The Occupation of Eliza Goode, 2013, etc.) turns her attention to nonfiction while making generous use of her storytelling skills. Her heroes are Peter Medawar (1915-1987), a British scientist considered the father of transplantation, who discovered the phenomenon of acquired immunological tolerance—conditions under which the body would not reject a foreign tissue; and Francis Moore (1913-2001), the youngest chairman of surgery in Harvard’s history, who aggressively supported many breakthrough techniques, including those of Joseph Murray (1919-2012), who performed the first successful transplant, a kidney, between identical twins, in 1954. More significantly, Murray did the same with an unrelated donor in 1962. In her enthusiastic narrative, Mickle pays close attention to patients, especially Charles Woods, who suffered catastrophic burns in a World War II plane crash and underwent years of surgery, many by Dr. Murray, to restore his face and hands. During his later experiments, Murray remembered that foreign skin transplants lasted much longer on the debilitated Woods. Readers will enjoy the author’s lucid account of the history of transplants and the difficulties faced by the pioneers, and she also offers generous accounts of their courtships, marriages, and offspring. At the end of the book, Mickle, whose husband trained under Moore and Murray, includes a chronology and instructions on becoming a kidney donor. “Over a decade,” writes the author, her subjects “pioneered the giving and taking of organs that one of the surgeons called ‘spare-parts surgery,’ or borrowing life, which in no way belittled the ultimate gift of retrieving life for one so close to losing it.”

An irresistible if often gruesome account of a great medical struggle that featured a happy ending.