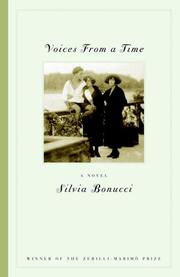 VOICES FROM A TIME

This debut novel by Bonucci, known in Italy as an anti-Berlusconi political activist, is the portrait of a wealthy Jewish family living in Trieste in the turbulent period between 1900 and the rise of the fascist movement in the ’20s.

Judging from the author's dedication, “To Grandmother, because this is her story,” it is a narrative with a basis in fact. Chapters are related in the voices of various members of the Levi family, creating a layered impression of largely tragic events, precipitated by the flirtatious irresponsibility of the mother, Gemma; the inability of her banker husband, Sandro, to deny her any extravagance; and the ill health of the couple's sensitive, neurotic eldest son, Marcello, who suffers a near-fatal case of meningitis, and a subsequent dependence on morphine. There is an engagingly unconventional brilliance to the family. Gemma, for example, describing living in a Trieste apartment overlooking the sea when she was growing up, recalls, “Mama and I would dive from the living room window directly into the water.” The impulsiveness, joie de vivre and wish to dazzle that make Gemma so charming also make her feckless and wanton. Dolly, her daughter, whose voice is the book's moral compass, sadly observes that her mother went out to parties and social engagements so frequently that “I have to refer to photographs to be reminded of her face, because without them I see only the back of a figure turned away from me.” Bonucci does an excellent job of recreating a hectic period of decadence and ruin, in which a family, despite meaning everything to one another, are mutually self-destructive. She is equally adept at pinpointing the ways family members manipulate one another. Dolly, for example, identifies Marcello's most hateful behavior as, “the systematic sabotage of our rare moments of happiness” with ill-temper or psychosomatic symptoms. And yet there is a similar remoteness to these characters, an inevitability or determinate quality that permits us to accept more easily than we should the wreck of so much happiness.

Bonucci can't quite muster the necessary urgency and suspense. There is something finished or unchangeable in her characters that marks them as belonging not to a novelistic present but to a historical past.

MY NAME, A LIVING MEMORY
by Giorgio van Straten
Fiction