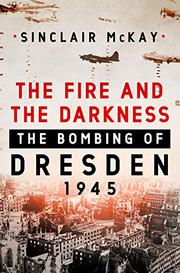 THE FIRE AND THE DARKNESS

A history of the 1945 bombing that made Dresden “a totem to the obscenity of total war.”

On the evening of Feb. 13, 1945, writes British literary critic McKay (The Scotland Yard Puzzle Book, 2019, etc.), British bombers unleashed a savage attack on the Nazi-controlled city of Dresden, killing some 25,000 people and turning the “Florence on the Elbe,” as the elegant cultural center was known, into “a burnt and bloody wilderness.” The bombing was the focus of Kurt Vonnegut’s Slaughterhouse-Five, based on his experiences during the historic firestorm as a prisoner of war. After describing life in Dresden before the bombing, McKay re-creates the nighttime attack in the words of residents as well as German officials, Allied commanders and bomb crews, and many others. “No one could ever imagine that our city would be the victim of a cruel and senseless bombing,” says Gisela Reichelt, who was 10 at the time. Hers was among many eyewitness accounts McKay examined in the city’s archives. Like others, she dismissed the nighttime air-raid alarms—they had always proven false—that preceded the dropping of nearly 4,000 tons of high-explosive bombs and incendiary devices. Payloads from hundreds of planes set the city on fire, tore buildings apart, and dismembered people in shelters. With good weather and few Nazi defenses, young airmen pursuing “just another target” found Dresden was “theirs to incinerate.” McKay’s harrowing narrative conjures the “satanic music” of passing aircraft and the burning of corpses whose stench was still recalled years later, all set against the daily malevolence of life under the Gestapo. Many immediately questioned the morality of bombing a city of limited strategic importance (it was a rail transport hub). American planes engaged in subsequent Dresden raids. The city, including its baroque churches and concert halls, has since been restored.

A full and powerful account of warfare that ignored the distinction between military and civilian objectives.