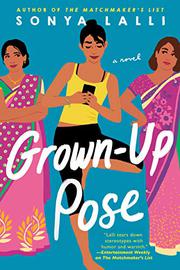 A 30-something woman attempts to figure out who she really is, with occasionally hilarious and disastrous results.

Anu Desai was always the good girl. She listened to her traditional Indian parents, became a nurse because it was practical, got married young, had a daughter, and then reduced her work hours so she could focus on parenting. But now that Anu’s older and taking stock of her life, she realizes that’s she’s missing one crucial thing—herself. Unhappy in her marriage and desperately trying to discover what she wants out of life, Anu asks her husband to move out, much to the shock of her parents and her mother-in-law. She starts dating again, takes a solo trip to London, and, perhaps most shockingly, buys a yoga studio despite the fact that she knows nothing about running a business. She goes through the motions of all the experiences she missed by marrying young—getting her heart broken, having a one-night stand, going out to clubs. But every person Anu encounters in her new life only serves to remind her of what she left behind. Was she too hasty in giving up almost every aspect of her old life? Could she possibly move forward while hanging on to some parts of her past? Lalli (The Matchmaker’s List, 2019, etc.) depicts Anu as a strong and complex character—a woman who loves her family but still wants more out of her life. Although her relationship with her husband is what spurs Anu to change, her relationship with her parents is at the heart of the book. They’re sweet, loving, funny, and, as Anu learns, they’re more open to change (and more complicated) than she originally thought. Anu’s struggle to find herself is wrought with obstacles and sometimes frustrating, but the resolution of her story is both satisfying and realistic.

A moving look at one woman’s journey between her family and her desire for independence.