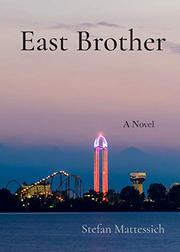 Twenty-something Jess Cooper is a “sweet, rudderless kid” in the Navy. Many of the adults in his life felt that he had “no fire in him…and he had no particular reason to think they were wrong.” The sensitive, artistic young man still seems unsure what to do with his life, but he feels no special urgency to figure it out. However, as a result of a bureaucratic error, he’s presented with an opportunity to escape the Navy’s despotic discipline, so he goes absent without leave while his ship is docked in San Diego. He seeks out his uncle Milo Manning, a “beach bum” who fritters away his days “time surfing, making art…and eking out a livelihood as best as he could.” Milo lives in East Brother, a California beach town that was once a “haven for bohemians and mystics looking for their chance at Shangri-La,” but it’s now overrun by development and new-money millionaires. In fact, Harry Contento, an unscrupulous real estate agent, is relentlessly trying to pry Milo’s property from his hands. It turns out that Milo is just as lost as his nephew is, but he introduces Jess to a “mogul in the making” who has much bigger dreams: “Jack the Cat,” a legendary heroin addict who managed to become the head of a criminal narcotic empire.

Mattessich skillfully constructs an ambient mood of aimlessness in this novel. Along the way, he gets across the extraordinary sense of alienation of those who lack ambition in a careerist age. Jack is an intelligently conceived foil to Jess and Milo, as he’s preternaturally motivated and always ready to leap headlong into new and uncertain experiences. Jess is neither dumb nor lazy, but he is irremediably average; indeed, his ordinariness seems to be the source of his decency and his despair, and the author depicts this conundrum with impressive subtlety. Milo, meanwhile, is shown to be caught between the bliss of freedom and the onerous weight of purposelessness, and Mattessich thoughtfully and poetically captures his predicament: “Life surrounds him, root and branch, in tendrils of smilax and the snares that spiders weave. It turns in circles of awesome fecundity. But he senses its remoteness, too, like a humming you hear only as the susurration of blood in veins.” Mattessich is at his best when he plumbs the depths of his characters’ brokenness and limns the elusiveness of redemption: “[Milo] doesn't know where he stands anymore, or if there is even any place to stand. That margin has become a surface, and it flattens out a little more each day, robbing him of a vital third dimension.” Overall, this novel offers readers an unflinchingly realistic and achingly sad depiction of a profound lonesomeness—one that can’t be remedied by company but, at the same time, isn’t completely hopeless, either.

A heartbreaking and delicately composed story about the pain of ennui.