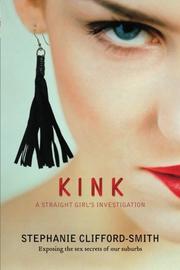 Funny, intriguing personal accounts of the kinkier side of sex.

Whether readers are into bondage, submission, people dressed up in furry animal costumes or just vanilla sex, the four-year research project undertaken by Aussie Clifford-Smith (A Marvellous Party: The Life of Bernard King, 2004) will evoke pleasure. Interested in the dirty details of the goings-on in other people’s bedrooms, the author placed an ad in a newspaper, trolled Internet fetish chat rooms and attended swinger parties to learn more about what drove people to their personal kinks and how it took shape in their lives. Each chapter introduces a new person and their kink, with the author providing space for them to explain the intricacies of their urges. Fleshing out each anecdote are Clifford-Smith’s own thoughts, sometimes heightened by comparisons to artwork or great novels or injected with humorous asides or statistics. The author, a self-proclaimed vanilla-sex enthusiast, was unable to remain entirely on the sidelines, and was eventually pulled into the action by one of her subjects. "That was undoubtedly the biggest surprise of them all and, while it was useful, I'm glad it didn't last," she writes. Prostitution, bestiality, water sports, scat play, amputees—it’s all here. Clifford-Smith’s first-person observations, blended with the subjects’ various sexual proclivities, results in an intriguing collection of kinks. Beware though—even the author confides, “Who was I kidding when I thought I was unshockable?”

Not for the faint of heart, but certainly the inquisitive mind—or libido.

SEX IN THE MUSEUM
by Sarah Forbes
Newsletter sign-up