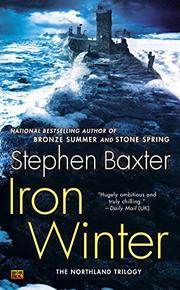 Once again, stunning worldbuilding is the order of the day. In 1315, Extelur, originally built thousands of years ago as a wall to hold back the encroaching seas, has expanded into a vast linear city housing the most powerful civilization in the world. To the east lies the Hattusan (Hittite) Empire; to the south, Carthage, having destroyed Rome in the Punic Wars, occupies North Africa and Iberia; the Mongols hold sway in Asia; in the Americas, three sprawling civilizations have arisen. As the story opens, old scholar Pyxeas studies the behavior of glaciers in Coldland (Greenland). He returns to Extelur with a young Inuit companion, Avatak, and bad news: The current bitterly cold weather is but a harbinger of a new Ice Age. But Pyxeas’ understanding of the forces and processes behind this is yet incomplete, so he plans to travel to Cathay to consult the scholars there, meanwhile warning Extelur’s fractious leaders of what is to come. Few, of course, believe him—until another heatless summer is rapidly followed by a winter of unprecedented ferocity. As Pyxeas and Avatak make their way to Cathay, they observe civilizations in the throes of collapse. The Hattusans, menaced by Scand and Rus hordes fleeing the north, make a fateful decision: uproot their entire empire and sail south to challenge Carthage for control of the agricultural wealth of Egypt. All this is brought to vibrant life in a series of fine character studies and interactions, even if the plotting is far less probable than the densely woven backdrop. The drawback is Baxter’s tendency to drench everything in detail, all too frequently slowing the narrative to a crawl.

Impressive and worthwhile, but even committed readers will be tempted to skim at times.

THE MASSACRE OF MANKIND
by Stephen Baxter
Sci-Fi

IN THE COURTS OF THE CRIMSON KINGS
by S.M. Stirling
Newsletter sign-up