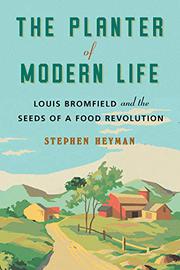 THE PLANTER OF MODERN LIFE

In his first book, former New York Times editor Heyman recaptures the fascinating life of a man rife with paradoxes.

In this exploration of the life of Louis Bromfield (1896-1956), the author chronicles his journey from the darling of American expatriate writers in Paris in the 1920s—and later an agricultural visionary—to the dissipation of his fame and influence. But this is not just a standard biography; Heyman turns the story of this novelist, screenwriter, nonfiction author, and pioneering farmer into an utterly engrossing account of both his life and his times. For years, everything Bromfield touched turned golden, his reputation and robust book sales easily surpassing those of Hemingway and Fitzgerald. His contacts and friends were a who's who of international literary lions, Hollywood royalty, potentates, and politicians. His horticultural ideas, embodied with varying success in his Malabar Farm in Ohio, were indispensable for early organic farming in the United States. Yet lavish spending, chronic overextension, and arrogance served to undermine Bromfield's notable accomplishments and even overshadow his considerable humanitarian efforts during the Spanish Civil War and World War II. He died in 1956, his prestige in tatters. Heyman marshals meticulous detail, unflinching appraisal, indelible personalities, and rich character study in a narrative that straddles worlds and eras and never flags. These elements coalesce within a fluid, remarkably propulsive writing style that keeps the pages turning. This is a biography of dual landscapes—literary and pastoral—as much as a chronicle of a man. The narrative succeeds on every level, not least in Heyman’s evocation of time, place, and the origins of American agricultural blunders that plague us still. The first third of the book, dealing chiefly with the Bromfield family's years in France, will be irresistible to those unaware of Bromfield's early eminence in letters or his relationships with such intimates as Gertrude Stein and Edith Wharton. Bromfield's story clarifies a period cloaked in romanticism and a movement buttressed by conservationist ideals.