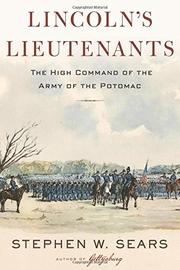 The High Command of the Army of the Potomac
by Stephen W. Sears
BUY NOW FROM
AMAZON
GET WEEKLY BOOK RECOMMENDATIONS:

From “Old Fuss and Feathers” Winfield Scott to Ulysses S. Grant, the succession of Northern generals during the Civil War receives a thorough scouring in this massive, elegant study.

Eminent Civil War historian Sears (Gettysburg, 2004, etc.) sifts through the archives to track how the Army of President Abraham Lincoln took some years and numerous setbacks finally to get its act together until final victory. The initial period before and after the Confederate attack on Fort Sumter was marked by indecision and unpreparedness on the part of the new administration as well as that of the Union Army, led by the aging Mexican-American War hero Scott. His initial alarming memorandum to appease the secessionists by giving up Sumter and Fort Pickens did not bode well for smooth relations with the new president. As Scott was too obese and infirm to lead battle, Irvin McDowell led the attack at Bull Run, which ended in a Union rout and caused Scott to be replaced by the “stubbornly uncooperative” George McClellan. The Union Army gained its new name, Army of the Potomac, and the officers were reorganized. However, McClellan’s rocky stint lasted only until November 1862, after the dilatory, stagnant move toward Richmond and the bloody Battle of Antietam, which prompted Lincoln’s Emancipation Proclamation, derided arrogantly by McClellan. Exasperated by McClellan’s “over-cautiousness,” Lincoln subsequently endured the “darkling doldrums” of generals John Pope, Ambrose Burnside, and Joseph Hooker before finding a fighting match in George Meade and U.S. Grant. Indeed, writes Sears, “the high command that closed the war in April 1865 was a world apart from the high command that opened the war.” The author wades through dense research not only chronicling the military maneuvers of the war, but also the intensive political intrigues surrounding the high command. Sears lists 20 generals who were “dead and gone serving the Army of the Potomac” by the time of the surrender at Appomattox.

A staggering work of research by a masterly historian.

FOR COUNTRY, CAUSE AND LEADER
by Stephen W. Sears
Nonfiction

TO THE GATES OF RICHMOND
by Stephen W. Sears

THE LONG ROAD TO ANTIETAM
by Richard Slotkin
Nonfiction

THE SWORD OF LINCOLN
by Jeffry D. Wert
Nonfiction