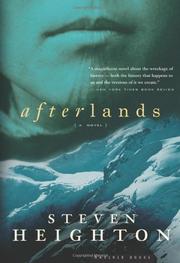 A well-known incident of Arctic survival and its more obscure aftermath form the rich subject of the Ontario poet-novelist’s ambitious successor to his excellent debut novel, The Shadow Boxer (2002).

The afflicted vessel was the Polaris, which during an 1871 voyage toward the North Pole became locked in ice, jettisoned 19 crewmen and passengers on an ice floe off the Greenland coast (to lighten the ship’s load), then inexplicably abandoned them to a six-month ordeal, before finally being rescued. Heighton’s story begins in the “after lands” of Groton, Conn., where in 1876 Inuit survivor Tukulito (aka “Hannah”), the Polaris’s interpreter, must endure her husband’s compulsive departure on another polar expedition, and the death (from the after-effects of prolonged exposure to cold) of their beloved daughter; and a year later in Mexico, whence German crewman Roland Kruger, an embittered intellectual and dreamer, has fled his memories of the Arctic ordeal and his hopeless unrequited love for Hannah. The extended flashback that describes the six-month misadventure is a numbingly dramatic, visually stunning tour de force, which mingles terse narrative with excerpts from Arctic Experiences, the popular book later fashioned from the journal kept by American officer Tyson, who became by right of seniority de facto “captain” of the survivors—and whose version of power struggles between his embattled command and (mostly German) rebel seamen earns Kruger’s lifelong enmity. Tremendous sequences and images (e.g., a battle over a seal’s carcass, gorgeous visions of previously unseen meteorological phenomena) animate this bravura centerpiece—whose effect is, alas, diffused by another lengthy “after land” story, focused on Tukulito’s sad fate and Kruger’s stoical empathy with mountain Indians besieged by a punitive Mexican Army force.

It’s another great story, but a departure from the one that Afterlands tells so splendidly—and to which the brilliant Heighton might better have confined himself.