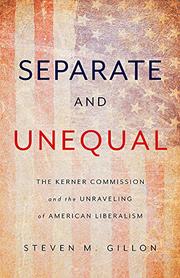 An eerily timely account of the National Advisory Commission on Civil Disorders, better known as the Kerner Commission.

In 1967, President Lyndon Johnson hurriedly appointed the high-profile commission in response to widespread race-based unrest around the country, especially in Detroit and Newark. Like many former presidents who announced advisory groups, Johnson sought to offer the appearance of concern without having to concretely address the unrest. The president hoped the commission would delay any report until after the 1968 presidential campaign. However, pushed by commission staff lawyers as well as members John Lindsay, the mayor of New York City, and Sen. Fred Harris, a detailed, scathing report about white degradation of black urban areas quickly became reality. Gillon (History/Univ. of Oklahoma; Pearl Harbor: FDR Leads the Nation into War, 2011, etc.), a resident historian for the History Channel, describes the many internal controversies of the commission using authoritative details and lively prose. He also goes beyond the inner workings to demonstrate how the commission helped countless Americans better understand the alarming realities of nationwide racism. The public awareness of the report emerged the same week as the assassination of Martin Luther King Jr., and the convergence of those two events meant an unexpectedly intense focus on racism throughout the country. With the reality of systemic racism finally recognized among prominent white Americans, it appeared that African-Americans could feel safer about speaking truth to power without sounding like overzealous radicals. Gillon’s research about the Kerner Commission, bolstered by hours of interviews with the surviving members, is extremely well-documented and also offers the feel of being ripped from today’s headlines. “The report’s most important legacy,” writes the author, “was its willingness to acknowledge the role of white racism in creating the conditions that sparked the riots….Unfortunately, despite all the progress that has been made over the past five decades, many of those same conditions still exist.”