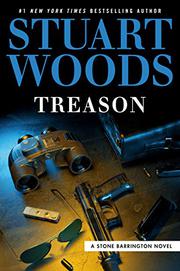 Uber-lawyer Stone Barrington, now officially a special adviser to the CIA (Stealth, 2019), takes on a delicate government job that keeps shape-shifting into other jobs.

How much higher can they fly? Stone, a former New York cop, succumbs to aviation broker Callie Stevens’ pitch and buys a Gulfstream 500 so he can commute nonstop to his stately home in England. His longtime lover, Holly Barker, plans to resign from her position as secretary of state to run for president. But every silver lining has a cloud. On Holly's way out the door, deputy director Maclean McIntosh warns her that there’s a mole in the State Department, and Holly asks Stone to find out more. A bit of sabotage against Stone’s expensive new plane points to Callie’s abusive ex-husband, pilot Eddie Casey, but the Gulfstream still makes it across the Atlantic, where an invitation from Stone’s friend Marcel du Bois, France’s answer to Warren Buffett, brings Stone into contact with slippery Boston investor Peter Grant and, through him, with Russian oligarch Yevgeny Chekhov, who wastes no time pumping Grant for insider trading tips. Some of the plot strands peter out; others lead somewhere, often in unexpected ways. Stone’s amorous couplings with party arranger Tessa Martindale and Vanessa Baker, owner of the Baker’s Half Dozen chain, both end abruptly, though not for the same reason. Rumbling in the background like summer thunder is the search for that mole. But the most sublime moment, limited to the regular cast, comes when Joan Robertson, Stone’s long-suffering secretary, asks, “Who left the house on the gurney?” and he replies, “A woman of my acquaintance—you don’t know her.”

Bon appétit to readers who like their international intrigue sweet and weightless as a soufflé.