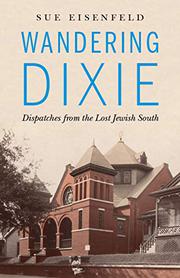 A nonobservant Jewish woman chronicles her journey to investigate the interwoven histories of the South’s Jews and African Americans.

In a series of brief excursions, Eisenfeld, a communications consultant who teaches science writing in the Johns Hopkins University MA in Science Writing program, recounts her travels from Virginia to Mississippi in search of the South’s lost Jewish communities. The further she traveled, the more she was convinced that the histories of Southern Jews and African Americans were inextricable. The trip forced her to reevaluate stereotypes about Jews and the South as well as her own “unexamined belief that I was a non-racist, open-minded, ‘color blind’ person with progressive views about acceptance, cultural sensitivity, and everything else that’s politically correct, or as I like to see it: respectful.” Eisenfeld visited the few remaining descendants of once-thriving Jewish communities and traversed cemeteries and converted synagogues. She toured former Jewish-owned slave plantations and schools built by Sears, Roebuck, and Company president Julius Rosenwald, “a Jewish Yankee who came down South to do good.” As the author notes, the complex role that Jews have played in Southern race relations has inspired conflicted emotions. Some owned slaves and fought for the Confederacy, some died in defense of civil rights, and many were simply bystanders more concerned with their own peace and prosperity than with taking a political stance. The bystander’s legacy is the one with which Eisenfeld was surprised to find herself identified as a Northerner. As a result, she made a private commitment to increase her anti-racist political activities. Written in friendly, accessible, occasionally clunky prose—the author is a fan of extended compound adjectives such as “could-be-in-any-Jewish-home”—the book is geared toward an audience of readers much like Eisenfeld before she took her journey: curious, open-minded, and ready for an introductory plunge into more profound racial consciousness.

A digestible introduction to a specific piece of the history of the South’s racial politics.

ALL OTHER NIGHTS
by Dara Horn
Nonfiction

THE COLOR OF WATER
by James McBride
Nonfiction