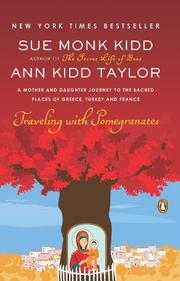 The New Age odyssey of bestselling author Kidd (The Mermaid Chair, 2005, etc.) and her daughter Ann.

In alternating chapters, the mother-daughter team recounts their different but parallel journeys of self-discovery. Mom found guidance in the regenerative myths of Demeter, Persephone and the Virgin Mary, while Ann, feeling confused and rudderless in her early 20s, wondered whether the power of Athena could help her unearth life’s purpose. Sue, who grew up in upstate South Carolina and worked as a nurse during her early adult life, eventually found her writer’s voice and moved with her husband to Charleston. Ann attended Columbia College (in South Carolina) and resolved to study Greek history after an inspiring group trip to Greece in the late ’90s, but she was rejected from her ideal graduate program. During a subsequent trip to Greece to commemorate Sue’s 50th birthday and Ann’s college graduation, Ann felt depressed about her future just as Sue was hoping to find spiritual clues to the next phase of her life. Most of the book is devoted to their first trip to Greece in 1998, narrated first by Sue, then Ann, from Athens to Eleusis (the sanctuary of Demeter) to Ephesus, Turkey, where “Mary’s House” is located. Both mother and daughter continually sound the themes of autonomy and self-realization. Yet while Sue hit on her life’s mission to write a novel—which became the mega-selling The Secret Life of Bees (2002)—Ann returned home, got married and had a baby. Although she did find courage to apprentice as a writer, the letdown is palpable.

A touching rapprochement between mother and daughter, but much of the writing is murky and both narratives sound curiously alike—won’t deter the many fans of Mom, however.

THE INVENTION OF WINGS
by Sue Monk Kidd
Fiction

THE SECRET LIFE OF BEES
by Sue Monk Kidd

To Dance in the Rain
by Clare Keating
Nonfiction