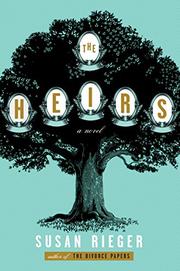 After her husband’s death, a Manhattan blue blood and mother of five receives a letter. Could her husband have had a secret second family?

According to an interview with Rieger (The Divorce Papers, 2014), about 25 percent of the people who have DNA testing learn that their fathers are people other than the men they thought they were. From that inspiration, she devised this assured novel of family, money, and secrets, reminiscent in theme and tone of Edith Wharton, though in Rieger’s world, those who err are not necessarily punished. Rupert Falkes, dropped off in his infancy on the steps of a British church, is a self-made man of the highest order, having come to the U.S., attended Yale Law School, and married the beautiful Eleanor Phipps, who comes from “that class of New Yorker whose bloodlines were traced in the manner of racehorses.” The Falkeses have five sons: Harry, a lawyer; Will, a Hollywood agent; Sam, a medical researcher; Jack, a genius musician; and Tom, a federal prosecutor. Two “married Jewish,” one is gay, all went to Princeton, and all adore their mother. When a woman named Vera Wolinski claims that her two grown sons are also Rupert’s and are thus entitled to a share of his estate, the family is thrown into disarray. Only Eleanor is calm—rather than get into DNA testing and court battles, she feels she “should do something for them.” Eleanor may have no burning need to know the truth (or perhaps she already knows it), but her sons don’t feel that way, and readers, of course, always want the scoop. Despite an omniscient narrator who lays out information as quickly and smoothly as a Vegas blackjack dealer, the argument of this book seems to be that we simply can’t know absolutely everything and it’s better that way. This is Eleanor’s view, certainly, and she is a character you don’t argue with.

Just in time for poolside reading, this elegant novel wears its intelligence lightly.

THE PRIVILEGES
by Jonathan Dee
Fiction