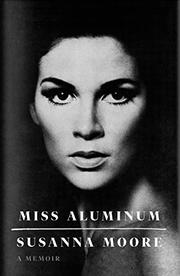 In her novel Sleeping Beauties (1993), Moore (Creative Writing/Princeton Univ.; Paradise of the Pacific: Approaching Hawaii, 2015, etc.) spun a dark fairy tale complete with a wicked stepmother and handsome prince who turns out, sadly, not to be charming. Here, she evokes that work of fiction: an account of her life, adventures, and misadventures, from childhood to her 30s. Once again, there is a cruel stepmother, a woman her father quickly married after Moore’s mother, who had suffered several mental breakdowns, died in her sleep; a hardscrabble young adulthood when Moore, at 17, was sent from her native Hawaii to live with her grandmother and aunt in Pennsylvania; beneficent godmothers; handsome lovers; and fabulous clothes. Moore’s stepmother resented Moore and her siblings, rationed their food, and deprived them of simple childhood pleasures. To escape her repressive home, Moore slipped away to visit a neighboring couple, the extremely wealthy and influential Kaisers: he, the famous shipbuilder; she, his beautiful younger wife, who bestowed on Moore castoff designer clothes, furs, and shoes. The Kaisers’ connections opened doors for the author: a job at Bergdorf’s; modeling, including at a boat trade show, where she wore a glittering silver sheath as Miss Aluminum; and minor roles in movies. With no aspirations to be an actor, Moore takes a wry, cleareyed view of the movie world’s pretensions. Like the Kaisers, Connie Wald, the glamorous widow of producer Jerry Wald, proved to be another benefactor, launching Moore into a world of literary, artistic, and entertainment royalty: Joan Didion, Audrey Hepburn, Elizabeth Taylor, Mike Nichols, and Jack Nicholson (with whom Moore had a brief fling), among many others. Moore portrays herself as “self-invented…a girl on the run,” buffeted by life, “high-spirited” but always in need of emotional and financial protection and constantly afflicted by a “ceaseless longing for my mother.” By her 30s, she stood on firmer ground: divorced, mother to an infant daughter, newly confident about shaping her future.

A captivating portrait of a woman in search of herself.

THE LIFE OF OBJECTS
by Susanna Moore
Nonfiction

IN THE CUT
by Susanna Moore
Fiction