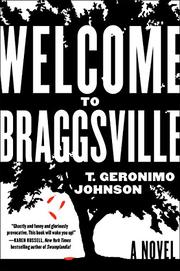 Four college students’ attempt to protest Southern folkways goes awry in a novel that blurs the line between academic satire and social realism.

D’aron, the hero of the second novel by Johnson (Hold It 'Til It Hurts, 2012), was raised in the small Georgia town of Braggsville, where he routinely absorbed homophobic abuse. So when he makes his escape to the University of California, Berkeley, he’s gratified by the atmosphere of tolerance. (Even if the definitions of tolerant behavior seem endlessly belabored: At one party, students apply dot stickers to the places on their bodies that are acceptable to touch.) D’aron quickly befriends Louis, an Asian aspiring comedian, Candice, an Iowa-born woman who claims to be part Native American, and Charlie, a black athlete. The quartet’s shared interest in social protest inspires them to head to Braggsville, where they plan to interrupt a Civil War re-enactment by staging the whipping and hanging of a slave. The novel’s opening third plays much of this as comedy, pitting college kids giddy on leftist jargon against retrograde Dixie, but the plan goes badly awry: Louis (in the role of the slave) winds up dead, and Candice (as slavemaster) is distraught, though what actually happened is deliberately vague. As D’aron falls under scrutiny from the town for concocting the plan, he’s forced to contemplate the racist underpinnings of Braggsville society and ponder what use his education is (or isn’t) when confronting it. Johnson is supremely savvy at capturing the students’ ideological earnestness, finding the humor in academic jargon (a faux glossary is included), and exploring the tense divides between blacks and whites in the South. And though the reader might occasionally feel whipsawed by Johnson’s shifts in tone from comedy to tragedy, the swerving seems appropriate to the complexity of its theme.

A rambunctious, irreverent yet still serious study of the long reach of American institutional racism.

THE DAREDEVILS
by Gary Amdahl
Indie