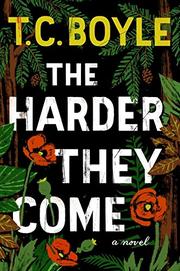 THE HARDER THEY COME

Violence corrodes the ideal of freedom in an ambitious novel that aims to illuminate the dark underbelly of the American dream.

In the prolific Boyle's latest (San Miguel, 2012, etc.), the estrangement between a father and son provides the plot’s pivot. The father is 70-year-old Sten Stensen, a Vietnam Marine vet and later a high school principal, whose military training comes in handy when he's among a group ambushed during a cruise. Three armed robbers threaten the group, and Sten kills one of them. He initially fears he might face criminal prosecution in Central America but subsequently finds himself hailed as a hero. In his mind, “He’d done what anybody would have done, anybody who wasn’t a natural-born victim, anyway.” There’s a hint of xenophobia in his attitude, a dismissal of a foreign culture where life is cheap and values ambiguous and where expediency has him cooperating with officials who let him know he has done them a favor. Sten has never been a hero to his son, Adam, a troubled youth since his days in his dad’s high school, now a self-styled mountain man on the outskirts of Fort Bragg, California. In Adam, Sten sees the chickens coming home to roost, the propensity for violence that they share twisted by drugs and paranoia. Adam has become involved with a right-wing anarchist 15 years his senior, who seems to be in the novel mainly to distinguish her misguided politics from his insanity. And even Adam and Sten function more as types and symbols than individuals, though Boyle remains a master at sustaining narrative momentum as the sense of foreboding darkens and deepens.

OUTSIDE LOOKING IN
by T.C. Boyle
Fiction

THE RELIVE BOX AND OTHER STORIES
by T.C. Boyle
Fiction

THE TERRANAUTS
by T.C. Boyle
Fiction

Breeze through T.C. Boyle’s epigraphs at your own peril—they’re often the germ of his stories.

“Epigraph and title are really the framework to start nailing the walls onto,” says Boyle, by phone, from home in Santa Barbara, California. It’s one day ahead of the national tour for his ...