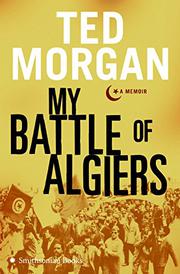 MY BATTLE OF ALGIERS

An unforgettable cautionary narrative of the author’s days as a French combatant and military journalist during the war for Algerian independence.

Biographer and historian Morgan (A Covert Life, 1999, etc.) spent most of his youth in America, but he was also a French citizen, subject to conscription in that nation’s military. One day he was a cub reporter for a newspaper in Worcester, Mass., the next found him a soldier headed to Algeria. It was 1956, not a happy time to be steaming into the Bay of Algiers. Urban terrorism saw its first systematic use there in the campaign of bombings and assassinations by Algeria’s National Liberation Front (FLN); the French adopted an open display of barbarity in response. Morgan doesn’t pretend that he behaved differently at first: He admits to having beaten a suspected insurgent to death during interrogation. Retelling that dreadful story in a hollow, detached voice, all he can say is that it disfigured him for life. Fortunately, he soon moved to work as a writer for a government newspaper; at this propaganda sheet churning out “perception management,” he could study the Algerian situation without having to participate in human destruction. Morgan knows how to drive a narrative forward, but the story comes wrapped in dispassion, as if the whole situation is too grotesque for him to hold it close. Yet there is incredible firsthand material: the French paratroopers’ methods of torture, the specifics of FLN bombings and the step-by-step dismemberment of the FLN in Algiers. For those whose images of the war and its combatants were shaped by Gillo Pontecorvo’s pro-FLN The Battle of Algiers, the book’s most startling element may be the wrecking job done on the image of Yacef Saadi, the organization’s less-than-heroic leader in the city.

Effectively employing a subdued tone, Morgan paints a grim picture of hopelessness leading to desperate militancy, reminding us that electroshocks and guillotines rarely solve anything.

A SHOVEL OF STARS
by Ted Morgan
Nonfiction

WILDERNESS AT DAWN
by Ted Morgan

A DREAM FOR PEACE
by Ghoulem Berrah
Newsletter sign-up