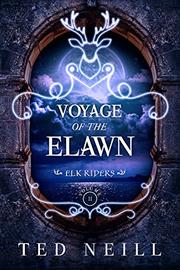 A prophecy spoken by the dead has sent 14-year-old Gabriella Carlyle away from her people on the island of Harkness. She must find the treasure of Nicomedes, which may help turn back a dangerous manipulator named Sade. He wants to purchase sacred Harkness land—next to the Tower of the Dead. Alongside Gabriella is her mentor, Omanuju; her withdrawn 11-year-old brother, Dameon; a village outcast and hunter, Mortimer Creedly; and an enchanted elk who can speak, Adamantus. They fly east on a haunted ship, Elawn, powered by a special magnetic stone. In their possession is a map that should help navigate the labyrinthine City of Dis, where the knowledge-obsessed Nicomedes stored his legacy. Along the way, the group faces wyverns, dehydration, and the mad Princess Sybil (whose own spell split her into two brats, the other named Libys). Alliances within the group, however, are fragile. Not everyone believes in the prophecy, and the promise of untold treasure can warp minds. Gabriella must also return to Harkness before the new moon, but her chances of success dwindle with each new adversary. The second volume of Neill’s (In the Darkness Visible, 2016, etc.) Elk Riders series is yet another blueprint for writing taut, exhilarating fantasy. Everything that can go wrong for the heroes does, and the author’s crafty twists seem to come from an endless supply. The characters’ emotional honesty is likewise riveting. Gabriella’s brother suffers from an ailment that enamors him more to numbers than people. She admits that, instead of saving him from drowning, “I wanted him to die.” Elsewhere, the prose is gorgeous, like a line about the moon being “a marble rolling in a puddle of ink.” Yet amid the fabulous ruins and creature battles is the imperishable wisdom that “if we treated others with the love and devotion we usually reserve for the gods...the world would be a much better place.” By the end, Gabriella, stripped of her companions, has learned this lesson well.

A fantasy built on divine, chaotic action and written with immense heart.

Pearl of the Seas
by Ruth Finnegan
Indie

THE MAGUS
by Ted Neill

THE MAGUS
by Ted Neill
Indie

IN THE DARKNESS VISIBLE
by Ted Neill
Indie

THE JOURNEY TO KARRITH
by Ted Neill
Newsletter sign-up