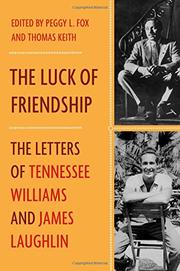 THE LUCK OF FRIENDSHIP

A collection of revealing and moving letters, spanning nearly 40 years, between the celebrated playwright and his publisher and friend at New Directions.

Laughlin, a poet in his own right, emerges in these pages as an exemplar of a friend. Invariably supportive, encouraging, and compassionate, the publisher was steadfast in his belief in Williams’ work—not just plays, but also poems and short stories—and his deep affection for the man. The early letters here, the majority of which are from Williams when he was young and barely known, ripple with hope and ambition. Even as early as 1942, Laughlin was writing that a script was “extremely interesting and very beautiful in places.” This sort of language continued until Williams’ death in 1983. As his career began to skyrocket (with The Glass Menagerie and A Streetcar Named Desire), he showed his own loyalty to Laughlin and ND by having his work published entirely with them. Later, however, we read that ND did not really have an interest in Williams’ projected memoir. His letters—even the brief ones—often contain luminescent sentences and a refreshing wryness: “The evils of promiscuity are exaggerated,” he wrote in 1945. “Of course, the primary and ultimate object is to remain alive,” he said in 1971. Occasionally, Williams offers snarky comments—e.g., about Gore Vidal—and some harsh ones for various critics, including Paul Goodman and Robert Brustein. Throughout, both Williams and Laughlin emerge as avid readers and admirers of the work of other writers, including Paul Bowles and others. The text is gracefully edited and thoughtfully and unobtrusively annotated by Fox, former president and publisher of ND, Williams’ last editor, and Laughlin’s co–literary executor; and Keith, an acting teacher and consulting editor at ND. The editors inform us about the people in Williams’ life and the specifics of the Williams productions that the letters discuss: cast members, director, critical and popular responses, etc.

The rivers of mutual affection, admiration, and artistry form a powerful confluence in these deeply affecting exchanges.

THE LETTERS OF SYLVIA PLATH VOLUME 1
by Sylvia Plath
Nonfiction

THE LETTERS OF ERNEST HEMINGWAY
by Ernest Hemingway
Newsletter sign-up