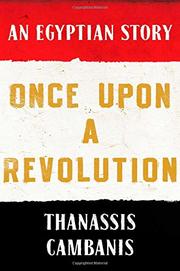 ONCE UPON A REVOLUTION

Smart, troubling study of the events surrounding Tahrir Square and their aftermath.

That Cairo landmark is a metonym. As journalist/historian Cambanis (A Privilege to Die: Inside Hezbollah’s Legions and Their Endless War Against Israel, 2010) records in this lucid account of the Egyptian uprising, strategists of the opposition spent much time figuring out just where they could organize protests without being quashed by the country’s well-organized military, setting some of the early demonstrations and meetings in places “where the streets were too narrow for police trucks and water cannons” until momentum grew. It didn’t take long for the revolt to sweep the country, with its crowning day on Jan. 25, 2011. Cambanis profiles ordinary Egyptians who rose up against the Mubarak regime, some out of support for the Islamist cause, others in the hope of secular democracy. Their political divide runs deep. As the author writes of one key actor, “El-Shater didn’t seem to understand how much the liberals hated the Islamists, and how much the revolutionary Islamist youth mistrusted the Brotherhood leadership, himself included.” It is for that reason that the revolution—which, Cambanis reminds us, necessarily involves tumult and violence—remains incomplete. “I fell in love with the Tahrir Revolution,” he writes, “but this love didn’t blind me to its faults.” Still, to judge by this account, those faults are fewer than those of the previous regime, which leaves some hope that the people of Egypt are headed in the right direction—even if the Muslim Brotherhood soon “exposed itself as power hungry and eager to use violent tools of repression to silence opponents.”

A clear exposition and analysis of complex, swiftly changing events. The book gives readers cause to understand why we might support regime change in the Middle East, even if it brings instability and incoherence.

THE BURIED
by Peter Hessler
Nonfiction

THE ROAD TO TAHRIR SQUARE
by Lloyd C. Gardner
Nonfiction

AFTER THE ARAB SPRING
by John R. Bradley
Nonfiction