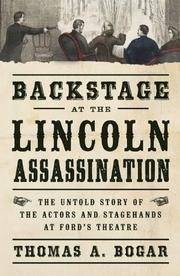 BACKSTAGE AT THE LINCOLN ASSASSINATION

The Untold Story of the Actors and Stagehands at Ford's Theatre
by Thomas A. Bogar
BUY NOW FROM
AMAZON
BARNES & NOBLE
LOCAL BOOKSELLER
GET WEEKLY BOOK RECOMMENDATIONS:

A convoluted detective story regarding the night of Abraham Lincoln’s assassination.

What will strike modern readers while spooling through this complex account of the details of employee whereabouts at Ford’s Theatre during the hours leading up to the assassination is how shockingly little security there was and how much everybody in the company had to drink. Maryland-based theater director, teacher and author Bogar (American Presidents Attend the Theatre: The Playgoing Experiences of Each Chief Executive, 2006, etc.) displays enormous knowledge of theater craft and players’ repertoire, such as that by featured actors Laura Keene and her company starring in Our American Cousin on that particular night, a corny comedy that was a great favorite of Lincoln’s. John Ford, owner and manager of the theater, had several theaters in the works, in Richmond, Baltimore and Philadelphia, and was known for his antipathy to the Union as well as his showcasing of promising talent John Wilkes Booth in numerous classical roles (Booth’s pro-Union brother Edwin avoided playing at Ford’s). Not only was the theater suspected as a “hotbed of spies and seditious plots,” but Booth was allowed free range of the place, picking up his mail, loafing about during performances and between stints at neighboring bars. On this Good Friday, the president’s party was to include Mrs. Lincoln and General and Mrs. Grant (although the Grants ended up not attending), throwing the theater into a tizzy of excitement and preparation—e.g., procuring furniture for the presidential box and selecting special music. Bogar painstakingly rehearses each and every actor, manager or stagehand, many of whom knew Booth well, for a run-through of the horrendous shooting and escape and delineates how individual versions varied hugely and would determine important legal consequences in a court of law.

MY THOUGHTS BE BLOODY
by Nora Titone
Nonfiction