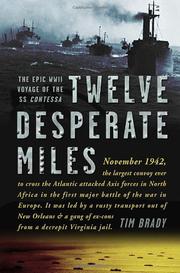 The first American offensive against Hitler, the November 1942 invasion of North Africa, began with a commando raid to capture an airfield outside Casablanca. Although not “epic,” it was a dramatic adventure rescued from obscurity by this lively history.

The idea originated with eager American spies on the spot and impressed Gen. Patton, commander of forces invading the beaches in Morocco. He didn’t tell his superiors (Marshall and Eisenhower), who expressed dismay when they learned of it. Reaching the airport required that two ships travel 12 miles up a shallow river, impossible without a local pilot; the spies found one, René Malevergne, a discovery probably responsible for this book because he kept a diary. Taking advantage of this historical treasure, Brady (The Great Dan Patch and the Remarkable Mr. Savage, 2006, etc.) builds his story around this local resistance figure and recounts Malevergne’s experiences under the Vichy government, his odyssey when he was smuggled out of Morocco to Gibraltar, flown to Britain and then to America before recrossing the Atlantic. He observed the landing from his hometown (Vichy French forces resisted; the Americans suffered hundred of casualties) and then piloted the ships, successfully reaching the airport despite obstructions, collisions and enemy fire.

An entertaining story of individual heroism, which Brady surrounds by an equally entertaining account of the North African invasion, the largest amphibious operation in history at the time.

AN ARMY AT DAWN
by Rick Atkinson
Nonfiction