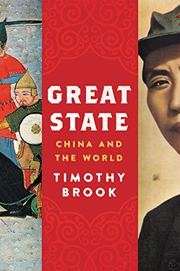 A Canadian scholar of Chinese history offers a fresh look at China’s engagement with the outside world over centuries in the form of 13 illustrative stories.

In this academic yet mostly accessible work, Brook makes two significant revisionist arguments about China and its history. First, he moves up China’s sense of being a unified state from the third century B.C.E., when it developed “dispersed kingdoms,” to the 13th century, when its occupation by the Mongol armies imbued it with a sense of military domination exercised through conquest. This was the self-important “Mongol Great State,” and every ruler since then has declared his regime to be a “Great State,” according to Brook. Second, the author argues that, contrary to the myth of Chinese isolation from the world, the nation was very much aware of the “10,000 countries” that lay outside it, as the author relays through fascinating stories of contact. These involve a wide variety of protagonists that may be unfamiliar to many readers, including the “Persian Blue Princess” whom Khubilai Khan recruited for the Mongol throne; Korean emissaries who blew off course and landed in China; the Italian Jesuit missionaries who spread Renaissance ideas; and the droves of European traders descending on ports such as Canton. Indeed, Brook reminds us, China has frequently endured waves of conquest and occupation by “foreign” armies, from the marauding Mongol hordes led by Khan, who established the Yuan Dynasty (1271-1368), to the subsequent rise of the Ming Dynasty until 1644, when the Manchus swept through and established the Qing Great State, which collapsed in 1911. Brook then takes us all the way up to the early 21st century, noting how “China’s relationship with the world will continue to change.” The author also turns up intriguing new DNA evidence that the plague had likely emerged from Central Asia and devastated Chinese cities far earlier than it arrived in Europe.

With useful maps and stories within stories, this is an ingenious look at an often misunderstood country.