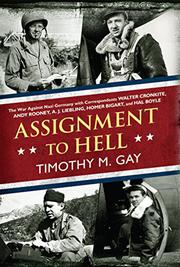 A sprightly synthesis of literature and history follows five newspapermen who cut their journalistic teeth during World War II.

Gay (Satch, Dizzy, and Rapid Robert: The Wild Saga of Interracial Baseball Before Jackie Robinson, 2010, etc.) ambitiously reconstructs the events of WWII through the eyes of the reporters who were on the ground (or in the air) trying to get the scoop first. The New Yorker’s A.J. Liebling fled Paris in advance of the invading Nazis; the AP’s Hal Boyle covered Operation Torch in North Africa; Stars and Stripes cub reporter Andy Rooney accompanied bombing missions to Germany; the New York Herald Tribune’s Homer Bigart witnessed the horrors of the Sicily invasion; and UP correspondent Walter Cronkite got a front seat at the Normandy landings on D-Day. Gay chose these five correspondents over, say, Ernie Pyle, who was already hugely famous, or Martha Gellhorn, because the five were “a journalistic band of brothers” (although one feminine point of view would have added a fresh perspective). Cronkite, Bigart and Rooney had all been trained in the Air Force and formed the core of the ill-fated Writing 69th, while Gay simply admires the work of Liebling, who was one of the oldest reporters. The author considers their newspaper beginnings in forging their styles: Cronkite the “meatball journalist” from Kansas City; how Bigart’s harsh Calvinistic Pennsylvania upbringing and speech impediment helped fashion his taut, wry sentences; Rooney, conscripted from Colgate University, brash and clueless at the Stars and Stripes, went on to make his mark “saluting the unsung grunts behind the scenes.” Boyle, also from Kansas City, worked his way up at AP and established a column while in Morocco, “Leaves from a Correspondent’s Notebook.”

ON THEIR OWN
by Joyce Hoffmann
Children