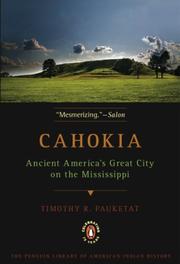 The latest entry in the Penguin Library of American Indian History traces the history and evolving theories about the large city of Cahokia, which sprang up near the current St. Louis, Mo., around 1050 CE.

Largely avoiding academic jargon, Pauketat (Anthropology/Univ. of Illinois; Chiefdoms and Other Archaeological Delusions, 2007, etc.) sketches the absorbing story of these people whose enormous earthen structures were for decades assailed by farmers’ plows, urban sprawl, the highway system and ignorant neglect. The “3200 acres of great pyramids, spacious plazas, thatched-roof temples, houses, astronomical observatories, and planned neighborhoods” now compose Cahokia Mounds State Park. Scholars estimate that more than 10,000 people once lived in Cahokia (many thousands more were in outlying settlements), a city that emerged so suddenly that Pauketat uses the term “big bang” to describe its advent. He explores various theories for its creation—the timely appearance of a supernova in 1054 might have been a significant factor—and describes how the influential Cahokian culture spread throughout North America. The author is careful to credit his scholarly ancestors in Cahokian studies, including Preston Holder, Melvin Fowler and Warren Wittry. Pauketat describes the enormous cultural significance of the game of chunkey (spears thrown at rolling stone balls), then zeroes in on some key earthen mounds and the bounties they’ve yielded—especially Mound 72, where multiple human burials were unearthed, including some personages so prominent that they became invaluable in understanding Cahokian politics and theology. Archaeologists also discovered a pit containing evidence of vast feasts, evidence buried so deeply that the remains still reeked. Among the most engaging late-emerging theories: the significance of women along the full range of the cultural spectrum—from human sacrificial offering to day-laborer to goddess.

A happy marriage of professional scholarship and childlike enthusiasm.