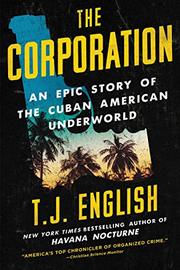 A stout but fast-moving tale of criminal misdoings from Havana to Manhattan and beyond, courtesy of a Cuban crime boss with a plan.

The corporation of the title is not one that Citizens United directly benefits, but it has plenty of political dimensions all the same. This corporation is the Cuban exile version of the Mafia, and its adventures and misadventures might make Don Corleone blanch. At the center of the action is a former police officer who, having fought against Fidel Castro at the Bay of Pigs and logged time as a bagman for corrupt superiors, set up shop in the United States. By English’s (Whitey’s Payback, 2014, etc.) account, José Miguel Battle y Vargas (1929-2007) reshaped the angles of the Cuban addiction to bolita, a simple lottery game, to work the gambling racket—and then other vices, including, in time, the trade in cocaine. Still young when he started, he “conveyed leadership through his demeanor and gravitas rather than inspiring rhetoric or brilliant business strategies.” The business turned violent, and Battle dealt decisively with his many enemies, one of whom killed his brother; as English writes of two of Battle’s soldiers, “they had done so many killings together in the last few months, they hardly needed to talk about it. It was all second nature.” Naturally, Battle had it in mind to take revenge on Castro as well as keep his empire afloat. Had the movie not had an earlier model, he might have made a good study for Scarface. Still, as will happen, the Corporation fell apart under the strain of rivalries, power struggles, and legal interference only to be supplanted by other criminal organizations. English capably covers half a century of criminal enterprise, avoiding the clichés of the true-crime genre while stocking his narrative with familiar players: the capos and goons, the cops and informants, a mistress or two, and John F. Kennedy.

Add another Mafia to the list (Italian, Irish, Russian…), then. Fascinating reading for true-crime buffs.

WHERE THE BODIES WERE BURIED
by T.J. English
Nonfiction

BORN TO KILL
by T.J. English

BACARDI AND THE LONG FIGHT FOR CUBA
by Tom Gjelten
Nonfiction