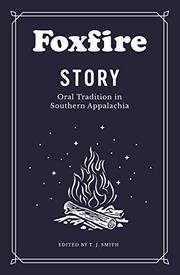 A book of Southern folklore and yarn-spinning from the long-running Foxfire franchise.

The Foxfire organization, as executive director and president Smith notes, now dates back more than half a century. It was the brainchild of a teacher who put his English class to work collecting stories from their home in “extreme northeast Georgia,” their mandate being to “talk to people about life and survival in the Southern Appalachian mountains.” The current volume ably extends that tradition, taking readers to the heart of the place while anthologizing pieces that stretch across centuries. The opening tale, for instance, recalls a bank robbery of 1936 in the county seat of Clayton: “Just one man, and he had a gun on her, and when he called for the money she screamed and run out at the back of the bank like a bullet—just went a-flyin’.” It took the sheriff, who tells the tale, a while to bust up the ring, for there was more than one bad guy involved, and he was nice enough not to put the leader, with the resonant name of Zade Sprinkle, in leg irons as he drove him off to jail. Smith serves up yarns aplenty, from tall tales to etiological myths and collections of folk beliefs (“If you drop a dishrag, someone is going to come visit you that is dirtier than you are”). Readers will learn that the local way of saying insomnia is “big eye,” that something “catty-whompus” is lopsided, that working people wear clodhoppers while someone in an office wears a “choke-rag,” or necktie. A special pleasure is a set of ghost stories, for the densely wooded mountains make a fittingly spooky background, and a howling “panther,” or mountain lion, naturally just has to be a shape-shifting woman. “I’ve never seen a big cat back in the mountains,” the storyteller allows, “but one time when I was digging up some Christmas trees…a cat came down and walked around my truck in the snow.”

A spirited, entertaining collection of stories and traditions that bear emulating in other regions of the country.