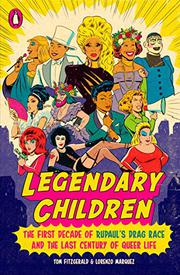 How the reality TV show RuPaul’s Drag Race both draws on and influences ideas and inspiration from the LGBTQ community at large.

The LGBTQ community has come a long way, write married bloggers Fitzgerald and Marquez (Everyone Wants To Be Me or Do Me, 2014). It is no longer bound by outdated laws restricting men’s clothing choices or being declared mentally ill. Here, the authors focus on a unique, historically defiant subculture of gay life: drag queens. They spotlight liberators and “street queens” like Marsha P. Johnson and Sylvia Rivera, who, when faced with the “attempted social genocide” of their demographic, openly confronted and defied designated societal norms and demanded their rights. Elsewhere, the authors celebrate the pivotal personalities who have impacted LGBTQ life through outreach, activism, or within their own personal devotion to drag culture—e.g., Charles Pierce, Jim Bailey, Divine, Leigh Bowery, Lypsinka, and José Sarria, among many others. The authors consistently cross-reference a host of LGBTQ cultural touchstones (“Herstory” lessons) with Drag Race and how it continues to represent queer culture. Fitzgerald and Marquez are generous with show references, sketch and lip-syncing challenge analyses, and how contestants on the show have drawn either acclaim or derision (or both) through their on-air interactions. A description of the show’s Speedo-clad “Pit Crew” dovetails with a discussion on desire and male physique, and the authors compare queens mastering the “art of shade” with the “reading” performers in the 1991 drag documentary Paris Is Burning. Informative, entertaining, melodramatic in its obsessiveness, and written with equal amounts of insight and wit, the book serves as a commemorative archive of drag in American life. Younger LGBTQ readers and RuPaul devotees will most appreciate the authors’ dedication to accurately chronicling the movement, detailing how race and gender blend harmoniously within the drag culture, and the minute details of a colorful and often controversial show that continues to mature.

Part history lesson, part appreciation for the LGBTQ movement and a show that continues to thrive because of it.