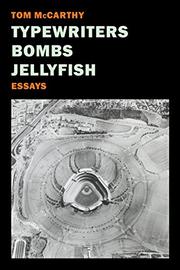 A debut collection of essays covering the scope of modern literature, along with a quiet plea for its violent overthrow.

When it comes to realism, McCarthy, the author of such experimental novels as Remainder (2007), C. (2011), and Satin Island (2015), doesn’t seek authenticity; he wants an explosion. The kind of real he has in mind involves "a radical and disastrous eruption within the always-and-irremediably inauthentic; a traumatic real; a real that's linked to repetition; a real whose framework of comprehension is ultimately neither literary nor philosophical but psychoanalytic." These essays are all invigorating examinations of writers (and artists such as Gerhard Richter, On Kawara, Ed Ruscha) who destroyed boundaries, collapsed rules of time, space, and gender, and bombed their own systems of control. On Joyce’s radical use of language in Ulysses, for example, McCarthy remarks, “this is not interior monologue; it’s exterior consciousness, embodied—or encorpsed—consciousness that has ruptured conventional syntax’s membrane, prolapsed.” More than 150 years earlier there was Laurence Sterne, who wrote a masterpiece in which conventional narrative order falls apart. "Error is everywhere in Tristram Shandy; it's the most glitch-ridden book imaginable—it's all glitch," McCarthy writes. "Everything gets lost or misdirected; every action generates unwanted consequences." A most illuminating essay on Kafka interprets the great writer’s “Letter to His Father” in cybernetic terms, as a counterproductive “feedback loop,” in which the relationship becomes not self-repairing but self-destructive. Through it all, McCarthy seems to be mapping out the coordinates of his own ambitions, wondering if there’s any unchartered territory left. The thought is there in the book’s final sentence, in a concluding essay on the life and work of the late Kathy Acker: “It might just be that the final measure of a writer is not so much what they achieve themselves as what they render possible for others.”

A TEMPLE OF TEXTS
by William H. Gass
Nonfiction

THE ART OF MYSTERY
by Maud Casey
Nonfiction

THE NEAREST THING TO LIFE
by James Wood
Newsletter sign-up